Afghanistan’s tank battalion is melting away 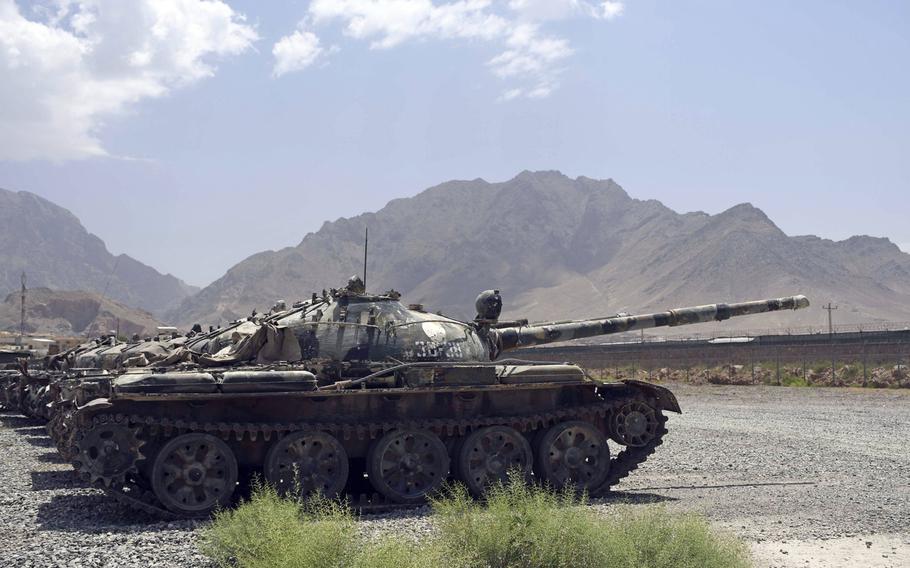 Buy Photo
Decrpit Soviet-made tanks belonging to Afghanistan's lone tank battalion stand idle on an army base on the eastern outskirts of Kabul on Saturday, June 23, 2018. Many of the old tanks are being scrapped as the tank battalion transitions to an infantry unit. (J.P. Lawrence/Stars and Stripes)

Buy Photo
Decrpit Soviet-made tanks belonging to Afghanistan's lone tank battalion stand idle on an army base on the eastern outskirts of Kabul on Saturday, June 23, 2018. Many of the old tanks are being scrapped as the tank battalion transitions to an infantry unit. (J.P. Lawrence/Stars and Stripes) 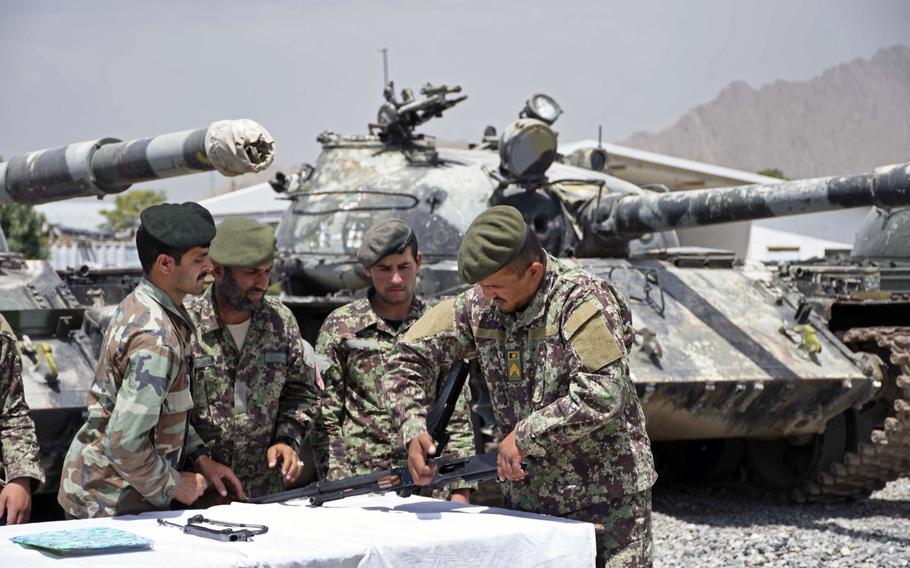 Buy Photo
Soldiers of the 3rd Kandak, 2nd Brigade, 111th Capital Division, Afghanistan's lone tank battalion, learn to maintain a PK machine gun during training at an army base eastern outskirts of Kabul on Saturday, June 23, 2018. Officials say the tank battalion is struggling to keep its Soviet-made armor functional, while the troops are being tasked as infantry soldiers rather than tankers. (J.P. Lawrence/Stars and Stripes) 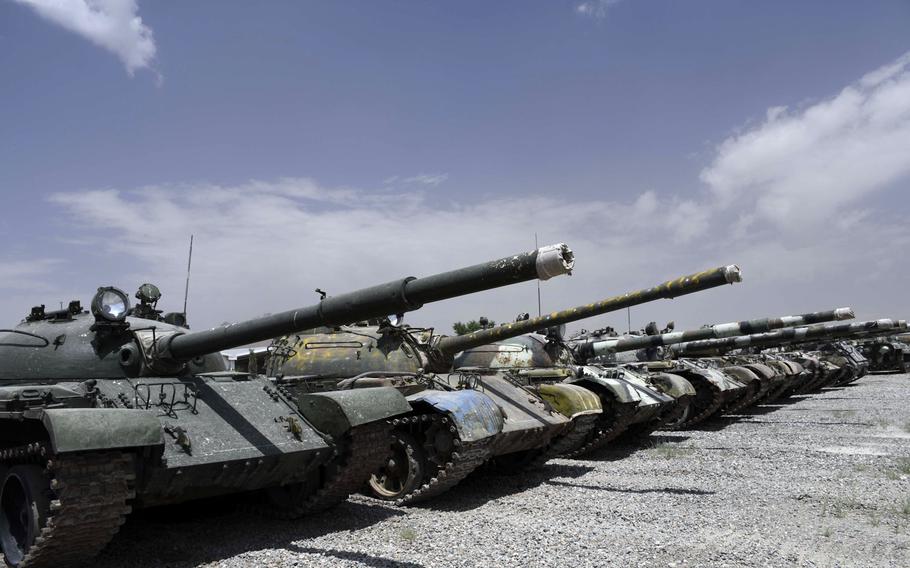 Buy Photo
A row of T-55 and T-62 tanks with mismatched camoflauge patterns and rust spots stand in a lot at an Afghan army base on the eastern outskirts of Kabul on Saturday, June 23,2018. (J.P. Lawrence/Stars and Stripes) 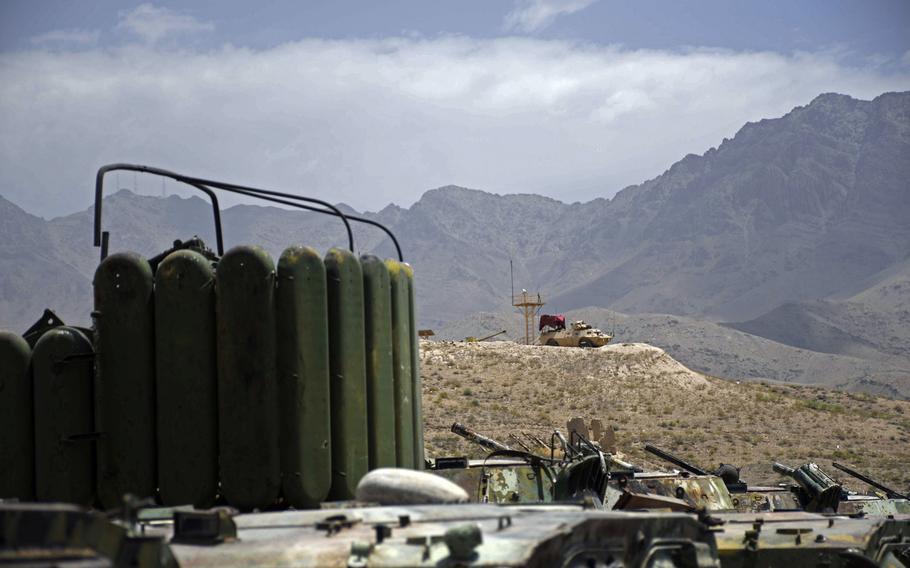 Buy Photo
An Afghan mobile strike force vehicle stands watch on a ridge overlooking a lot full of obsolete Soviet-made tanks at an army base on the eastern outskirts of Kabul on Saturday, June 23, 2018. (J.P. Lawrence/Stars and Stripes) 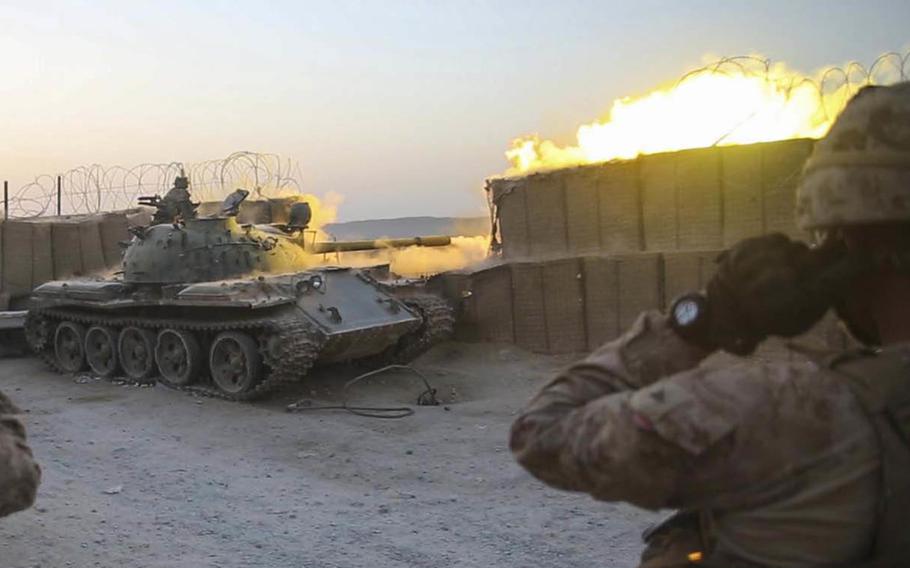 KABUL, Afghanistan — U.S. Marines plugged their ears as the muzzle blast from an Afghan T-55 tank firing toward enemy positions ripped through a gap in Hesco barriers at an embattled base in Helmand province, the same violent area where an American Green Beret was killed earlier this week.

A video clip of the 60-year-old tank firing its 100 mm main gun, released Tuesday, was shot earlier this month as Task Force Southwest Marines were advising Afghan commanders on maintaining equipment and sustaining personnel “deployed to the frontlines,” the military said. The advisers spent more than two weeks on Camp Nolay, a former U.S. and British base in the deadly Sangin district of the Taliban-dominated province, where nearly 1,000 coalition troops have been killed since 2001.

The brief footage is a rare glimpse at one of more than a dozen decrepit Afghan tanks still deployed to the besieged provinces of Helmand, Kunduz, Kapisa and Baghlan; many more of the country’s remaining Soviet-made T-55s and T-62s are gradually succumbing to the ravages of time. Maintainers can barely keep the beasts running, and those they can’t are being cannibalized for parts or sold off as scrap.

Some Afghan military leaders cling to hope that the country’s lone tank unit, 3rd Kandak (battalion), 2nd Brigade of the 111th Capital Division, will one day be re-equipped with new armor. But there are no plans to modernize the fleet of 40-ton machines because the U.S.-led NATO coalition that largely funds the Afghan armed forces sees little use for heavy armor in a guerrilla war now in its 17th year.

At the battalion’s Kabul headquarters, U.S. advisers have been training its troops for an altogether different mission of defending the gates of the increasingly deadly city as infantrymen. As far as the Americans are concerned, it’s no longer a tank unit.

“The Afghan Ministry of Defense, Afghan National Army and Capital Division do not consider and therefore do not employ the (government’s) only tank kandak as a tank kandak,” said U.S. Army Lt. Col. Martin O’Donnell, a coalition spokesman in Kabul. “They operate it as an infantry kandak.”

But, Maj. Gen. Abdul Nasir Ziaee, Capital Division commander, said he hoped the U.S.-led coalition would find a donor to help modernize the unit’s armor, which he said still plays a key role.

“These tanks are needed in combat operations,” he said. “That’s why we have sent them to military bases and military corps in the country.”

Yet few of the tanks are being sent into battle these days — four in Helmand are dug in as base defenses, while many have been rolled off to Kabul’s Khan Steel Mill instead.

Boom time at the steel mill On the Afghan capital’s eastern outskirts one recent Saturday, cars and vans weaved around flatbed trucks hauling half a dozen busted-up battle tanks. Pedestrians stopped and stared at the broken machines.

A common sight in the 1980s and ’90s, the tanks have seen rare use in the ongoing insurgency. More recently, they’ve been a key source of material for the steel plant, which opened in 2015 and has provided a boost to the local economy, officials said.

“We have decreased the import of (steel construction) products from abroad by 40 percent, provided direct jobs for 700 people and indirect jobs for hundreds more,” said Shahab Wardak said, a spokesman for the steel plant. “We are planning to double our employees in the next year.”

Derelict war machines have long been valuable as salvage here. During the civil war in the 1990s, warlords sold off to Pakistan the weathered remains of hardware the Soviets had lost or abandoned the previous decade.

But sending these tanks to the scrap heap isn’t what Col. Mohammed Nowroz Hidayat, the battalion commander, had in mind for his combat mission.

“As a professional, I would have liked to see them refurbished,” said Hidayat, who had led an infantry unit in Helmand before taking command of the tank battalion five years ago. “I would like a proper maintenance regime.”

Not-so-ready to rumble Four years ago, when Stars and Stripes toured the unit’s base on the edge of Kabul, the tank engines rumbled to life and billowed smoke, but officials did not start them on a recent visit. Instead, soldiers crowded around a table to learn machine gun maintenance, surrounded by standing rows of tanks with mismatched paint jobs and spots of rust on their hulls and turrets.

Off in the distance, a newer light armored vehicle stood watch on the ridge of a hill.

Introduced in the 1950s, the T-55 was a mainstay of Warsaw Pact forces through much of the Cold War. Reputedly the most widely produced tank in history, it was popular with Third World armies because of its simplicity, relatively low cost and rifled 100 mm main gun. The T-62 followed in the 1960s, armed with a smoothbore 115 mm gun.

Of the hundreds Afghanistan once operated, fewer than 60 remain operational — 13 T-55s were brought to augment about four dozen T-62s after ammunition for the latter began running low.

Kept running by scavenged components from a dwindling stockpile of rusting hulks, they’re not in good condition, Hidayat said.

Fire-suppression systems and equipment needed to drive through high water no longer function, he said, and few can roll very far.

One tank was destroyed in Helmand province more than a year ago, after it stalled and had to be abandoned on the battlefield. The Taliban couldn’t get it to move either, so they blew it up.

A tankless mission Hidayat still sees a mission for the machines’ booming cannons and blast-resistant armor, which he said shocks and frightens the insurgents, but tanks have historically had limited use here.

Soviet invaders in the 1980s found them unsuitable for the mountainous terrain. U.S., Canadian and Danish tanks have served here since 2001, but in the country’s south, where the terrain is flatter and the insurgency stronger.

In 2010, Marine officials said 15 M1A1 Abrams slated for Helmand during the surge would help project power into Taliban havens there. Lately, however, the Trump administration’s strategy has focused on aerial bombardment of insurgent enclaves.

Afghanistan hasn’t acquired any new tanks in decades, and in the years since the U.S.-led coalition routed the Taliban, international donors have supplied only lighter armored vehicles.

More recently, as ground forces have struggled to beat back a resurgent Taliban, NATO resources have been directed toward building up the military’s more promising components — its air force and special operations command, including two battalions of wheeled armored vehicles reassigned from the regular army to the commandos to boost their combat power.

Such efforts are focused on “sustainable and cost-effective solutions that increase the mobility and lethality of the (security forces) for the current threat,” O’Donnell said. “There is no hardened opponent at the moment that requires investment in a traditional heavy armor force.”

The old tanks are a part of the unit’s legacy, O’Donnell said, but not its future.

Despite boasting on Facebook in June that it was advising Afghanistan’s only tank kandak, the U.S. Army’s 5th Battalion, 1st Security Force Assistance Brigade, has been largely focused on improving the unit’s skills and equipment for searches and screening of pedestrians and vehicles heading into Kabul, said battalion executive officer Maj. Charles Comfort.

“They don’t show any interest in the tanks,” Hidayat said.

Still, his men had little experience or knowledge of guarding the city’s gates when they took over the mission from the Interior Ministry this spring. Afghan and coalition officials pledged to bolster defense of the capital after a series of attacks earlier this year. The first six months of 2018 were the bloodiest on record since the conflict began.

Hidayat was somber about the withering tank fleet.

“It’s like when you cultivate a garden and someone comes along and cuts down your trees,” he said.

Stars and Stripes reporter J.P. Lawrence and Zubair Babakarkhail contributed to this report.