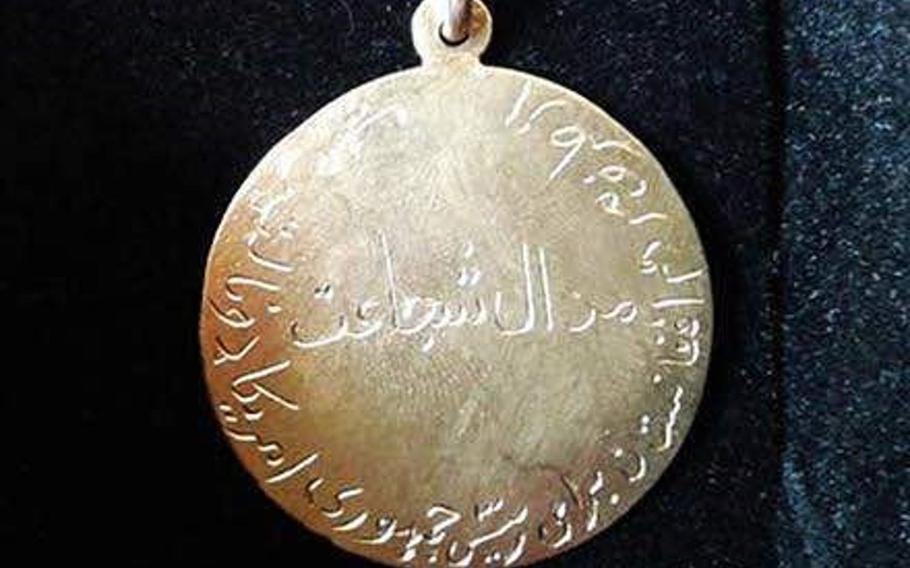 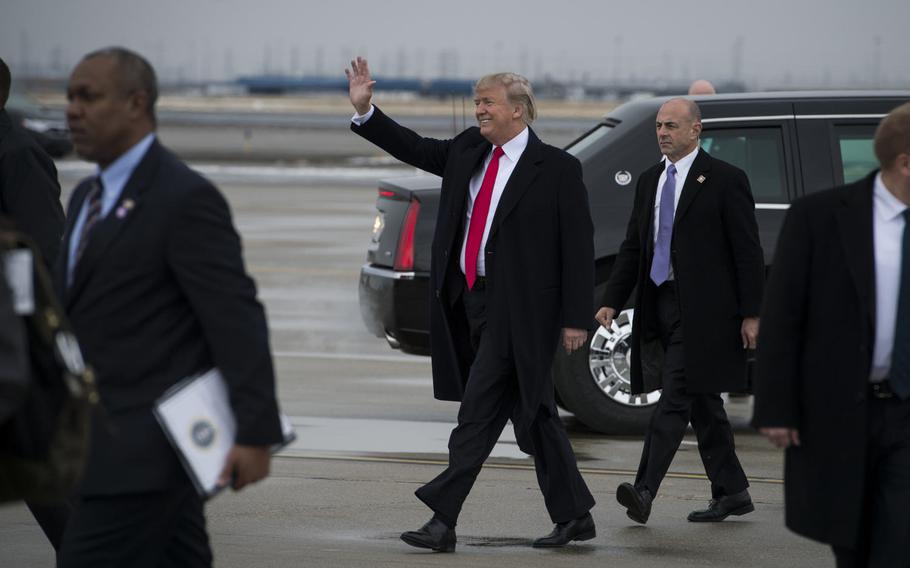 KABUL, Afghanistan — Hundreds of Afghans in Logar province pitched in to recognize President Donald Trump with a gold medal for bravery after his administration suspended aid to Pakistan.

Community members from tribal leaders down to cobblers chipped in 45,000 afghanis, or about $650, to pay for the handcrafted gold medallion, which was presented to the U.S. Embassy on Saturday.

It carries an inscription in Dari, which reads: “For bravery, from the Afghan people to Donald Trump, president of the United States of America.”

The medal was awarded less than two weeks after Trump, in his first tweet of 2018, accused Islamabad of accepting $33 billion in aid since 2002, while giving “nothing but lies & deceit” in return. Days later, the White House said it would hold back $2 billion in military support until Islamabad did more to fight terrorism.

People here have long protested that Pakistan gives terrorists safe haven, said Farhad Akbari, a tribal leader of Logar province, which is situated south of the Afghan capital. Until Trump, he said, those protests seemed to fall on deaf ears.

“No one would listen to our cries,” he said. “The main reason the U.S. is in Afghanistan is because of Osama bin Laden and al-Qaida, but [bin Laden] was killed in Pakistan.”

Akbari noted that top Taliban leaders — founder Mullah Mohammad Omar and Omar’s successor, Mullah Akhtar Mohammad Mansour — had found sanctuary in Pakistan. Omar died in Pakistan in 2014, and Mansour was killed in a drone strike there in 2016.

Radio Free Afghanistan first reported about the medal on Sunday. An embassy official confirmed the medal had been presented but declined to provide any further details.

A vocal critic of Islamic extremism, Trump has tried to ban immigration from certain Muslim-majority countries, yet he’s been praised by some citizens in Islamic countries where the U.S. is helping fight terrorism.

The president’s remarks exposed Pakistan’s “true face,” said Akbari, who said he has fought the Taliban in Logar province.

Across the border in Pakistan, Trump’s tweet raised the ire of officials, who said much of that aid was in return for supporting the U.S.-led war effort in Afghanistan. Some said they felt betrayed by the U.S. over Trump’s actions.

For about 16 years, the U.S. has relied on Pakistan for overflight and land transit into landlocked Afghanistan. Washington has also paid Islamabad to station Pakistani troops in the border region with Afghanistan.

In the wake of the controversy, however, Islamabad reportedly released for the first time a list of 72 terrorist groups operating on its soil, along with a warning to citizens that they’d be punished for contact with those groups.

Getting tough with Pakistan plays into longstanding tensions between the South Asian neighbors, but critics say the U.S. is simply trying to blame someone else for its failure to crush the insurgency over the past 16 years.

Insurgents control or contest over a third of Afghanistan’s 407 districts, more than at any time since the Taliban regime’s 2001 ouster. In addition, an ISIS offshoot has proved resilient in the few provinces where it operates.