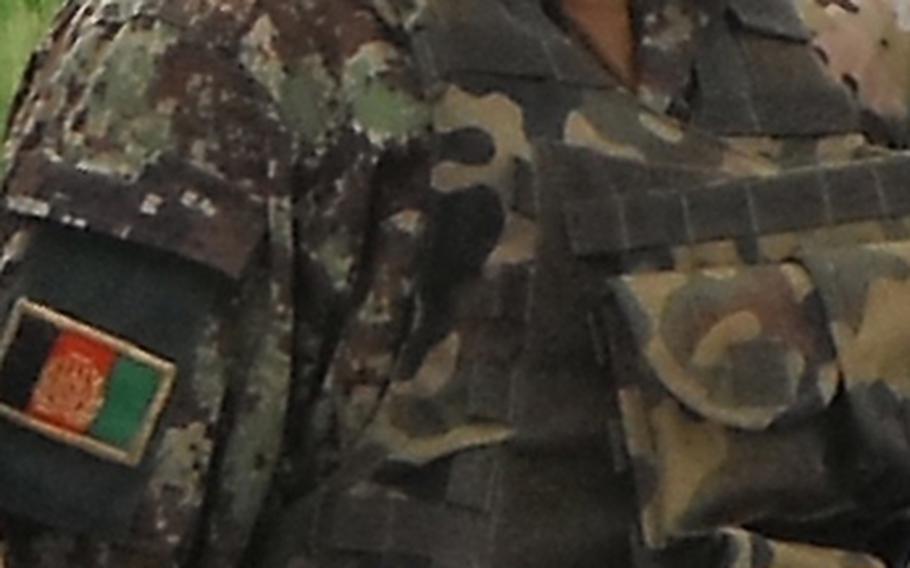 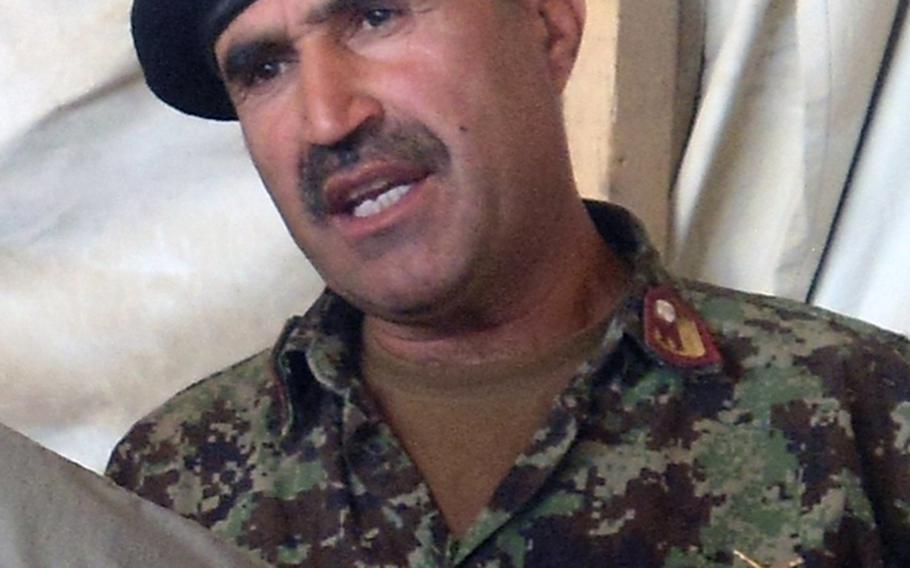 Afghan Col. Mohammad Wasil and members of his command staff are suspected of pocketing the wages of Afghan soldiers, selling supplies allocated for troops and extorting subcontractors who worked on the base. (Photo courtesy Lt. Col. Dan Mouton) 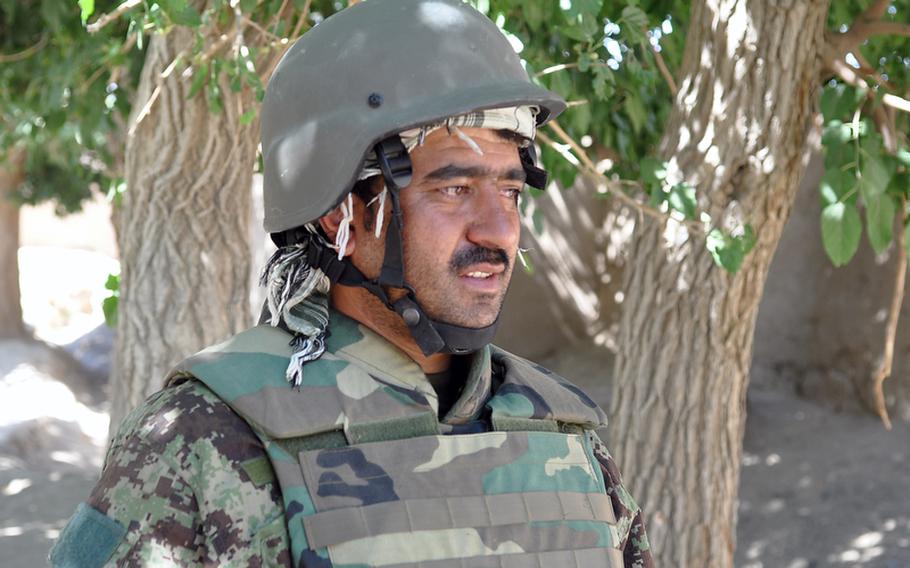 Buy Photo
Afghan Capt. Safiullah Stankakai said frustration lingers among troops over Col. Mohammad Wasil, whose alleged misconduct included skimming wages from low-ranking soldiers. ''We have had a lot of problems, and some of the soldiers are angry,'' he said. (Martin Kuz/Stars and Stripes) 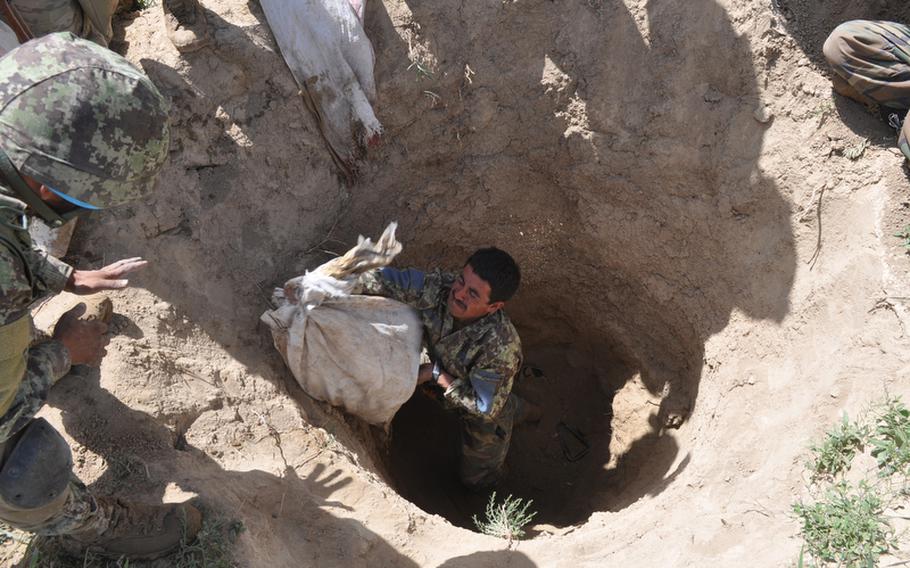 Buy Photo
An Afghan soldier removes a bag of bomb-making materials stashed by insurgents in a farm field near the village of Muqur in Ghazni province. Col. Mohammad Wasil, the former commander of the battalion to which the soldier belongs, is suspected of selling weapons to militants. (Martin Kuz/Stars and Stripes)

&ldquo;Good people come to Muqur, but good people don&rsquo;t leave,&rdquo; Afghan Col. Mohammad Wasil told him this past spring, during one of their earliest conversations. &ldquo;It is impossible to stay clean in Muqur.&rdquo;

At the time, Mouton interpreted Wasil&rsquo;s comment as an indictment of this farming village in the eastern province of Ghazni, where the Taliban remains entrenched, imposing its authority through bribery, coercion and murder.

By July, deep into a corruption investigation of Wasil and several of his senior officers, Mouton believed the remark was something closer to an admission.

&ldquo;I realized Col. Wasil could have been talking about himself,&rdquo; he said.

Wasil and Mouton first met after the 1st Battalion, 504th Parachute Infantry Regiment deployed to southern Ghazni in March. Along with Mouton, a senior combat adviser assigned to the unit, two of its companies moved into a base in Muqur. The outpost doubles as the headquarters of an Afghan army battalion, which was then under Wasil&rsquo;s command.

Mouton brought an open mind to working with the Afghan colonel. Less than two months later, after suspicions arose among U.S. officers that Wasil had ties to the Taliban, Mouton was investigating him.

In the ensuing weeks, Mouton uncovered a raft of alleged offenses that suggested a man with a dual identity: the battalion commander as crime boss.

Wasil, 47, is suspected of tipping off militants to U.S. troop movements, releasing detainees in exchange for bribes and selling weapons to insurgents. He and members of his command staff also appear to have pocketed the wages of Afghan soldiers, sold supplies allocated for troops and extorted subcontractors who worked on the base.

Mouton turned over his findings and the investigation to Afghan officials last month. He held on to his scorn for Wasil.

The scandal reveals at once the culture of graft that plagues the Afghan military and the reluctance of its leaders to crack down on misconduct.

An Army official with the U.S. command in eastern Afghanistan estimates that, in the 14-province region, there are more than 50 corruption cases involving high-ranking Afghan officers.

&ldquo;The corruption is embedded like a tumor, and it isn&rsquo;t easy to remove,&rdquo; said Lt. Col. James Salome, commander of the 1-504, referring to efforts by some Afghan officials to stymie the Wasil investigation.

Afghan authorities arrested Wasil after prodding by Salome and Mouton. Yet, despite losing his post, he could take charge of another battalion. Salome worries that Afghan troops, who are struggling as they inherit the country&rsquo;s lead security role from U.S. forces, will grow jaded unless their superiors pursue reform.

&ldquo;It&rsquo;s not just about stealing,&rdquo; said Salome, 40, of Clarksburg, N.J. &ldquo;The bigger problem is that you have these soldiers &mdash; young men &mdash; who are willing to die for their country, but they can see that not all of their leaders are equipped to lead them.&rdquo;

The poor example offered by senior officers could spawn another generation of corruption, a dispiriting prospect in a country riven by war since 1979.

&ldquo;If these (younger) guys see bad behavior go unpunished, what can you expect to happen when they&rsquo;re eventually in charge?&rdquo; said Capt. Caleb Ling, who commands the 1-504&rsquo;s Company C based at Muqur. &ldquo;They&rsquo;ll do the same thing, and they&rsquo;ll be just as easy for the Taliban or whoever to influence.&rdquo;

On a morning in May, before the sun breached the horizon, U.S. and Afghan troops departed Combat Outpost Muqur to begin a three-day mission. They traveled to a nearby village that, like much of southern Ghazni, received scarce attention from the Polish military during the four years its forces occupied the area before handing over control to the 1-504.

The soldiers split their time between building a security outpost and combing the village for insurgents. More than one resident explained why they found none.

&ldquo;They told us everyone had known for three days we were coming,&rdquo; said Ling, 27, of Charleston, S.C.

The timing sharpened doubts about Wasil &mdash; U.S. officers had informed him of the mission three days earlier. They suspected that he or someone in his inner circle leaked the details to a Taliban contact.

Graft pervades the Afghan military, a circumstance widely recognized by U.S. commanders here and one that, to varying degrees, they consider a cultural norm.

In most cases, they avoid intervening. The approach is born of pragmatism &mdash; too much corruption, too little manpower &mdash; and the notion that, as much as possible, Afghan security forces should police their own.

U.S. soldiers noticed soon after occupying COP Muqur in March that the Afghan battalion lacked sufficient ammunition, fuel and food. Though they speculated that Wasil might be hoarding or selling supplies, they considered the matter better left to Afghan officials.

But his apparent disclosure of a mission to the enemy posed an explicit threat to U.S. troops. Salome directed Mouton, a former aide-de-camp to Gen. David Petraeus, to launch an investigation.

Mouton spoke with Afghan officers and soldiers, subcontractors on the base and public officials and villagers in Muqur. The sources, coupled with additional evidence assembled by the 1-504&rsquo;s command staff, implicated Wasil and more than a half-dozen senior officers in a crime ring linked to the Taliban.

Wasil&rsquo;s alleged misdeeds include divulging U.S. troop movements to a retired Afghan army commander who consorts with local Taliban leaders. The information likely enabled militants to evade capture during the U.S.-Afghan mission in May, and may have aided their planning of attacks on American soldiers during the previous two months.

U.S. officials assert that Wasil and his officers, working through intermediaries, further abetted insurgents by selling them hundreds of automatic rifles. The cabal appears to have sold new guns intended for the battalion and weapons that Afghan soldiers had confiscated from militants.

Wasil also ordered the release of at least 10 suspected insurgents detained by American troops and placed in Afghan custody, according to Mouton. Wasil apparently granted their liberty for a price. In one reported instance, he received 2 million Pakistani rupees &mdash; roughly $21,000 &mdash; to free a Taliban operative.

Other alleged schemes of Wasil and his collaborators exploited Afghan subcontractors and soldiers at COP Muqur.

Construction crews needed to drive through the base while building a new headquarters complex for the Afghan battalion, a $52 million project managed by the U.S. Army Corps of Engineers. Workers claimed that Wasil&rsquo;s officers charged $1,000 for each truckload of gravel hauled out, and demanded a $60,000 &ldquo;security fee&rdquo; from one company.

Afghan troops endured shortages of ammunition, fuel and food as Wasil and his cohorts allegedly siphoned supplies that they later sold to villagers, some of whom had ties to militants. Low-ranking soldiers suffered added hardship, with the colonel and his senior officers forcing them to take extended leave and skimming their wages in the meantime, according to Mouton.

&ldquo;They&rsquo;re victims just as much as the villagers who are coerced by the Taliban,&rdquo; Mouton said of the soldiers. &ldquo;I feel sorry for them.&rdquo;

Mouton described Wasil as an unimposing man with a subdued manner who, during his time at COP Muqur, complained of persistent headaches and dizziness. In the midst of his investigation, Mouton brought Wasil to a medical clinic at a larger U.S. base a few miles away.

His health presumably didn&rsquo;t improve when Afghan officials, armed with the results of the U.S. investigation, detained Wasil a few weeks later.

If surprised by his arrest, Wasil retained his composure, perhaps confident he could atone for his apparent crimes with a refund. When Afghan authorities detailed the charges against him, he reportedly replied, &ldquo;If there is a problem, I can pay it all back.&rdquo;

The headquarters of his unit&rsquo;s brigade is located on a coalition base in the city of Ghazni, 60 miles north of Muqur. Held there in what Mouton likened to a &ldquo;white-collar facility,&rdquo; Wasil was provided a cellphone and allowed visitors.

The soft treatment bothered Mouton less than the efforts of some Afghan officials to prevent Wasil&rsquo;s case from moving forward.

The Afghan military, on the premise of corroborating the allegations of U.S. officials, dispatched no fewer than three teams of investigators to COP Muqur. Their work served mostly to stall the judicial process and intimidate sources, with one group attempting to expose soldiers who talked to Mouton.

Afghan officials have told Mouton and Salome that Wasil will not return to his old battalion. The fate of the other officers implicated in the case remains unclear.

The possibility exists that Wasil will assume control of another unit, and even with the arrival of a new commander at COP Muqur, the fallout from Wasil&rsquo;s regime lingers for the Afghan troops there.

&ldquo;We have had a lot of problems, and some of the soldiers are angry,&rdquo; said Capt. Safiullah Stankakai, 29, a platoon leader. &ldquo;We don&rsquo;t know if it was all because of Col. Wasil or because of the people around him. There is a lot of confusion for us.&rdquo;

As U.S. forces prepare to end combat operations in Afghanistan in 2014, the disarray within the battalion concerns Mouton.

&ldquo;If they&rsquo;re in this kind of shape only two years before we leave,&rdquo; he said, &ldquo;that&rsquo;s a problem.&rdquo;

CorrectionDue to an editing error, Afghan Col. Mohammad Wasil's age was incorrectly stated. He is 47.