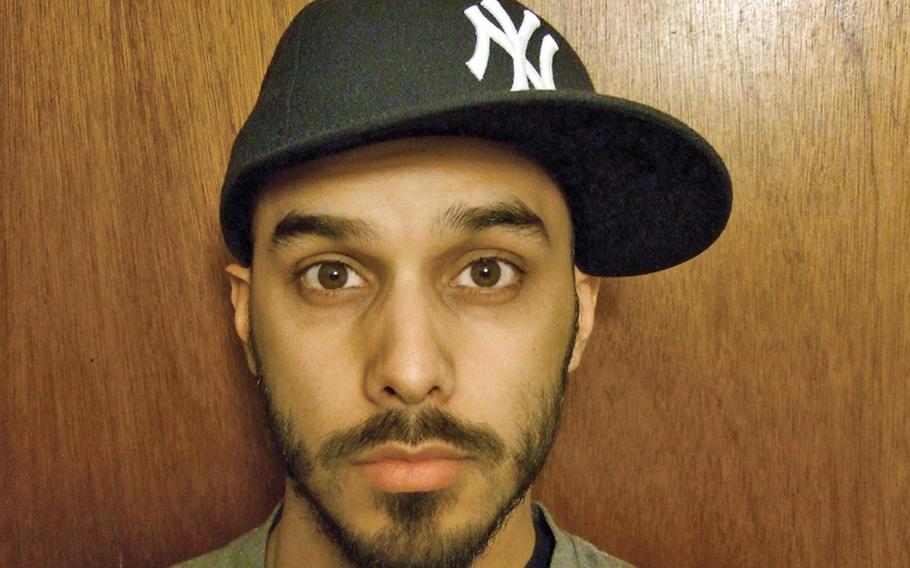 Louie Castro was arrested and jailed last month when customs officials at Miami International Airport discovered an Army warrant that listed him as absent without leave. Castro left the service nine years ago, but his discharge paperwork was apparently mishandled, prompting the warrant. (Courtesy of Louie Castro)

Louie Castro was arrested and jailed last month when customs officials at Miami International Airport discovered an Army warrant that listed him as absent without leave. Castro left the service nine years ago, but his discharge paperwork was apparently mishandled, prompting the warrant. (Courtesy of Louie Castro) 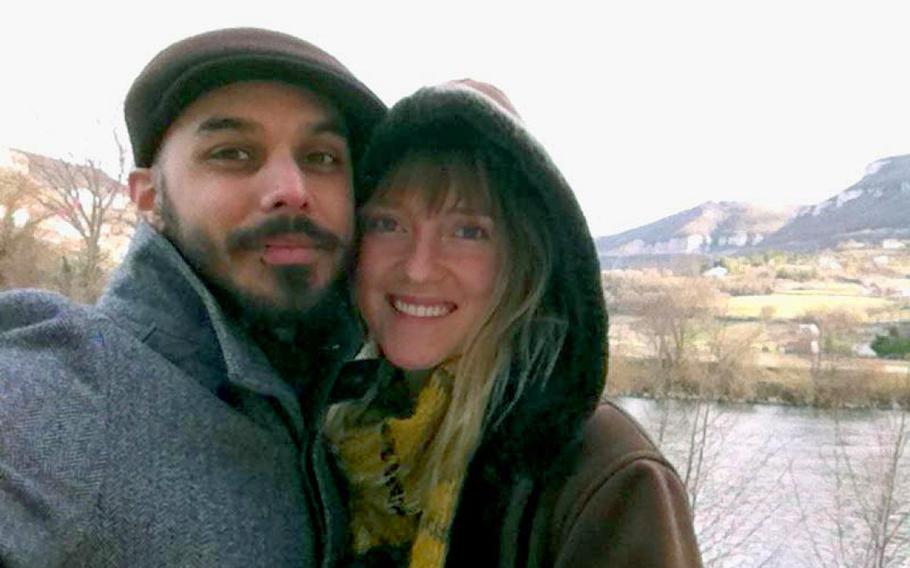 Louie Castro poses with his girlfriend, Lane Turkle, in France in December. Castro was visiting Turkle, who teaches English there, but he was arrested upon his return to the United States when it was discovered that the Army considered him AWOL and issued a warrant for his arrest. Castro left the Army nine years ago, but his discharge was apparently mishandled. (Courtesy of Louie Castro)

(Update: Late Friday, after the publication of this story, a spokesman at Fort Carson said officials at the base were able to finalize Louie Castro's DD-214 without requiring the former soldier to travel to the base. "We cannot speak to the special circumstances on why Pvt. Castro did not receive a DD214 9 years ago," spokesman Lt. Col. Steven Wollman said. "Fort Carson officials learned of Pvt. Castro's situation earlier this week and took action to address the problem of the missing DD214.")

WASHINGTON &mdash; Louie Castro is a 28-year-old religion major at Florida State University who should have started the final semester of his senior year last month. Instead, he spent 12 days in jail after being arrested at Miami International Airport because of an administrative error the Army apparently made when he left the service more than nine years ago.

The Army considered him absent without leave.

Castro was told he must fly to Fort Carson, Colo. &mdash; a base where he never served, but where his old Fort Hood unit, the 4th Infantry Division, relocated in 2009 &mdash; to resume his old life as an Army private long enough for military personnel officers to fix his paperwork. In the meantime, he missed the start of classes and was forced to withdraw, costing him his financial aid. He will not graduate on schedule.

A civilian lawyer representing Castro believes the veteran has a strong legal case against the government. He said conversations with Fort Carson officials indicate that many others have been arrested on similar warrants and that potentially hundreds of other former soldiers once based at Fort Hood could be unaware that warrants are out on them, ticking time bombs in their official government files because of clerical mistakes by military personnel officers.

&ldquo;We believe there are many more former soldiers that are either wrongfully in military custody or were in custody or released,&rdquo; said Castro&rsquo;s civilian attorney, Jonathan Crisp, adding that he had &ldquo;information from the AWOL apprehension officer, civilian liaison officer and the unit clerk that this has been an issue for some time.&rdquo;

Castro enlisted in the Army in February 2001, when he was 17, and there is no dispute that his military career ended ignobly. He went AWOL in July 2001, returning home to Florida. He said recently that he&rsquo;d left Fort Hood because he had been miserable in the Army, and because his mother was struggling financially and his father, who he said had been addicted to heroin, was hospitalized.

Castro was apprehended there more than a year later during a routine traffic stop, and sent to Fort Hood in shackles. There, he recalled this week, he served without further incident until then-Maj. Gen. Raymond T. Odierno, the division commander, approved Castro&rsquo;s request for a discharge in lieu of court-martial.

The paperwork Odierno signed on Dec. 4, 2002, directed that Castro receive an other-than-honorable discharge and &ldquo;be separated from the Army within five working days.&rdquo;

As Castro recalls, and as documents he provided to Stars and Stripes confirm, a sergeant from his unit took him around post, where he turned in his military equipment and clothing, listened as he was briefed on what transition assistance and benefits remained available to him, and was checked out at the medical and dental facilities. He gathered signatures as he went and brought the paperwork to his company commander, Capt. Hector Hernandez.

Castro packed his things and caught a Greyhound bus to Florida.

It never occurred to him, he said, that the thick file containing Odierno&rsquo;s order and all of his out-processing paperwork did not include a Form DD-214, &ldquo;Certificate of Release or Discharge From Active Duty.&rdquo;

&ldquo;Maybe I&rsquo;d get it in the mail,&rdquo; Castro said. &rdquo;I knew I wasn&rsquo;t going to have to prove I was in the military to anyone because I had been stripped of all my [significant] benefits.&rdquo;

Nine years have passed since that day. By all accounts Castro turned his life around.

His boss at the bagel shop in Tallahassee where he&rsquo;s worked for four years this week called him &ldquo;my best employee &hellip; basically the assistant manager.&rdquo; One of his professors at Florida State, where he majors in religion and has a 3.5 grade point average, spoke highly of him, calling Castro, &ldquo;upright &hellip; an excellent student.&rdquo; Another professor said in an email that she considers him &ldquo;smart, kind, promising, inspiring.&rdquo;

In December, Castro flew to Europe to visit his girlfriend, Lane Turkle, an American who teaches English in France. When Castro returned to the United States on Jan. 2, customs officers found an Army warrant for his arrest.

He then spent time in two more jails en route to Pinellas County, Fla. Besides the Army warrant, Castro also had an unpaid fine for loitering from 2005, he said. But after he was brought to court and paid that, he said, he was returned to jail and &ldquo;put in solitary confinement for four days for the Army hold.&rdquo;

He was allowed to leave his cell just twice a day, to make a phone call or take a shower.

His mother contacted Capt. Larry Kersey at Fort Stewart, Ga., who arranged for Castro to be released from jail on the condition that he go to the airport in Tampa, where there would be a plane ticket waiting for him to fly immediately to Fort Carson.

&ldquo;This is your last time to clear your military records. If you don&rsquo;t report, [there will be] another warrant,&rdquo; Castro said Kersey told him.

But when he arrived at the airport, U.S. Airways employees couldn&rsquo;t find any record of a reservation or ticket for him. Unable to afford a ticket on his own, and worried about getting arrested again, Castro left a phone message for Kersey, tracked down the trial defense service office at Fort Carson, and ultimately retained Crisp, a former judge advocate general officer who now practices in Pennsylvania.

Reached by telephone, Kersey declined comment. A public affairs officer at Fort Carson said she was unaware of Castro&rsquo;s case but would look into it.

According to internal Army emails obtained by Stars and Stripes, there is little doubt that back in 2002, Castro&rsquo;s unit simply didn&rsquo;t take him to the office at Fort Hood where he should have been given his final orders and DD-214. Michael Redwine, a civilian human resources supervisor at Fort Hood wrote on Jan. 30 that there is no way to finalize Castro&rsquo;s paperwork even these many years later without forcing him to travel to Fort Carson.

Short term, Crisp&rsquo;s goal is to convince Army officials simply to rescind the warrant, correct Castro&rsquo;s records and issue a DD-214 without requiring him to travel to Colorado.

But longer term, Crisp said Castro deserves a significant damages payment from the government for its error, as do any other soldiers who may have had incorrect warrants. While the Feres doctrine, named for a U.S. Supreme Court case, prevents soldiers from suing the Army, Crisp pointed out that Castro isn&rsquo;t a soldier. The Army&rsquo;s personnel office only thinks he is.

Castro, who described himself as a Buddhist who is &ldquo;still a follower of the teachings of Christ,&rdquo; said despite fearful moments, he found peace through spirituality during his ordeal, even teaching basic meditation techniques to other inmates.

&ldquo;There were times when I was really stressing out. In jail I spent nights in tears &hellip; [but] I try to take things easy,&rdquo; Castro said. &ldquo;If I knew I did something wrong it would be one thing, but I knew deep down that I didn&rsquo;t do anything,&rdquo; Castro said. &ldquo;I already knew that I paid for the mistake that I made when I was a kid. It was like I already made amends for it.&rdquo;