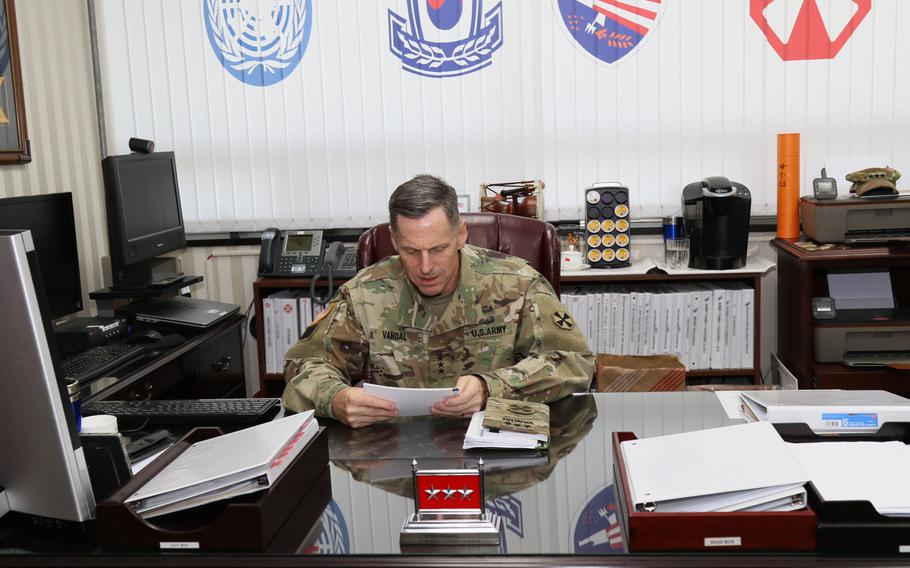 Lt. Gen. Thomas Vandal, Eighth Army commander, in his office at Yongsan, on Thursday, Sept. 22, 2016. Vandal said that the increasing threat from North Korea means decisions about moving U.S. forces away from the front lines must be driven by conditions, not timelines. (Jung Dong-in/Courtesy U.S. Army)

SEOUL, South Korea — The increasing threat from North Korea will keep some U.S. forces close to the front lines and likely push back the transfer of wartime operational control to the South until 2025, the 8th Army commander says.

Lt. Gen. Thomas Vandal said the much-delayed relocation of the bulk of U.S. forces in Korea to regional hubs south of Seoul is finally on track, with most major units expected to be in place by early 2018.

But the 210th Field Artillery Brigade will remain near the heavily militarized border with North Korea for the foreseeable future. The Combined Forces Command and USFK headquarters also will maintain a residual force at the Yongsan U.S. Army Garrison in Seoul.

“Right now it’s conditions-based moves,” Vandal said in an interview Thursday with Stars and Stripes at his office at the military’s headquarters in a stately building known as the White House on Yongsan. “That is because of the criticality of having the counter-fire capabilities to the north.”

Vandal, also the chief of staff for USFK and the Combined Forces Command, said the South Korean military must be able to fully take over before the artillery brigade can be moved.

That would include having and being able to operate a comparable multiple-launch rocket system capable of defending against the North’s massive arsenal.

South Korea had committed to having counter-fire forces capable of executing the mission during the early phases of war by around the year 2020.

Pyongyang has raised the stakes this year by conducting two nuclear tests and stepping up the pace of its missile launches as the communist country marches toward its stated goal of developing an atomic weapon that could reach the U.S. mainland.

The advances prompted South Korea to agree to allow the U.S. to deploy a high-altitude missile defense system known as THAAD.

The military has missed many deadlines and been forced to scale back efforts to relocate most American troops to regional hubs south of Seoul.

It also has put on hold plans to transfer wartime operational control to ally South Korea, originally scheduled for 2012, then 2015. South Korea asked for an indefinite delay after the North Koreans conducted their third nuclear test in 2013.

Under the current arrangement, the South is in charge of its own troops during peacetime, but U.S. commanders would take charge of all combined forces if war breaks out with North Korea.

Vandal said USFK has been working with South Korea’s military to develop its core capabilities so it could be fully responsible for its own security.

“I would anticipate sometime in 2025 timeframe, but again we’re not tied to a specific time; we’re tied to the conditions,” he said.

He said the $10.7 billion program to expand Camp Humphreys to accommodate an eventual population of 42,000 is finally shifting from the construction phase to the move phase, pointing out that the Republic of Korea is covering 92 percent of the cost.

He said the Eighth Army headquarters will be in place by July and the 2nd Infantry Division by January 2018. The 6th Medical Brigade also will move next summer, he said.

He also stressed that even when the move is completed, the U.S. military will maintain formidable capabilities on the divided peninsula, which technically remains at war after the 1950-53 conflict ended with an armistice instead of a peace treaty. The U.S. has about 28,500 servicemembers stationed in the South.

“There will still be the capability here on the peninsula, but not specifically for the initial portion of the long-range artillery attack that could occur,” he said.

Vandal also said the introduction of rotational forces has improved readiness and cohesion by reducing the turbulence from constant turnover of personnel. U.S. soldiers usually serve one- to two-year tours in South Korea. Under the rotational plan, units train and deploy together for nine-month stints.

“We’ve increased the number of rotational forces fairly significantly,” Vandal said. Other rotational units include a multiple-launch rocket system battalion, an engineering battalion and an aerial squadron that will replace its outgoing fleet of OH-58 Kiowa Warriors with Apache attack helicopters next year.

The 2nd Infantry Division was also transformed into a combined U.S.-South Korean division.

In a speech to the U.N. General Assembly on Friday, North Korea’s foreign minister blamed the U.S. for hostilities and vowed his country will strengthen its nuclear capabilities despite U.N. Security Council resolutions and sanctions.

Ri Yong Ho said the Korean Peninsula "has now been turned into the world's most dangerous hot spot which can even ignite the outbreak of a nuclear war."