5 facts you may not know about the Normandy invasion 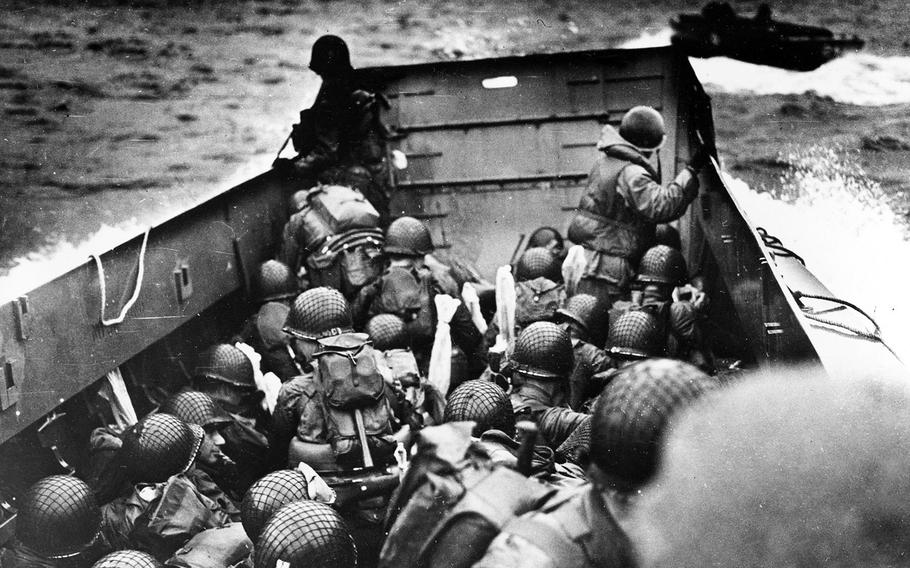 Five facts you may not know about the Normandy invasion:

Bloody A CompanyFor most the men of A Company, 1st Battalion, 116th Infantry, Normandy was their first taste of combat. For many of them, it would be their last. Four companies of the regiment, from the Virginia National Guard, were tapped for the first wave at Omaha Beach. A Company was tasked with seizing the road leading from the beach to the French town of Vierville a few miles inland. Even before the first landing craft hit the beach, things began going wrong. Strong current left many soldiers seasick and disoriented. U.S. bombers that were supposed to soften up coastal defenses had missed their targets because of thick clouds, leaving German gunners unscathed and ready to spray the beach with intense machine gun, mortar and artillery fire. A Company hit the beach in Dog Green Sector about 6:35 a.m., met by withering German fire. Within 15 minutes all the company’s officers and most of the NCOs were dead. More than 60 percent of A Company were killed or wounded.

Veteran joins the fightMany of the soldiers who landed at Normandy were new to combat when they hit the beaches. But one combatant had already been in the war since Day One. The USS Nevada was docked at Battleship Row at Pearl Harbor when the Japanese attacked on Dec. 7, 1941. The USS Nevada was struck by one torpedo and six aerial bombs, suffering 60 dead and 109 wounded. Nevertheless, her crew ran the ship aground to prevent the Japanese from sinking her. The vessel was refloated, refitted at Puget Sound and sent to the European Theater. On D-Day, the USS Nevada fired on German positions in support of the Normandy landings and later returned to the Pacific in time for the battles of Iwo Jima and Okinawa. Following the war, the USS Nevada was decommissioned after 30 years in the fleet and was scuttled in the Pacific in 1948.

Old Man and the BeachThe oldest American soldier who came ashore at D-Day didn’t have to be there. He was 56 years old, suffered from arthritis and heart trouble and had been relieved once in a dispute with Gen. George Patton. He was also the son of a president of the United States. However, Brig. Gen. Theodore Roosevelt Jr., then on the staff of the 4th Infantry Division, begged the division commander for permission to join the assault on Utah Beach, even appealing to his distant cousin, President Franklin D. Roosevelt, who approved the request. Brig. Gen. Roosevelt landed at Utah with the first wave, personally changing the plan of attack under fire after German resistance proved stronger than expected. Nearly a month later, Roosevelt was awarded the Medal of Honor and recommended for promotion to major general. When Gen. Dwight D. Eisenhower phoned to give him he news, he was told that Roosevelt had died of a heart attack the night before on July 12, 1944. He was buried with his comrades at the U.S. cemetery in Colleville-sur-Mer, Normandy.

The first to die?Among the first American officers killed in the D-Day landings was mortally wounded even before he could join the fight. At 2 a.m. June 6, 1st Lt. Robert Mathias was standing in the door of a C-47 preparing to jump with his platoon from the 82nd Airborne Division’s E Company, 508th Parachute Regiment. Suddenly German ground fire ripped through the aircraft, striking Mathias and knocking him to the floor. As the door light turned green, signaling time to jump, survivors said Mathias picked his bloodied body off the floor, shouted “Let’s Go,” and sprang from the aircraft. His lifeless body was found on the ground, still hooked to his chute.

Not all the problems were from the GermansAs if the Germans weren’t enough of a threat, American paratroopers at D-Day had to contend with their own equipment. American parachutes were equipped with buckles to release the gear once paratroopers hit the ground. It took so long to unhook the buckle, especially in the dark, in swampy ground and underfire, that a significant number of paratroopers were killed by Germans as they tried to wrestle out of their chutes. After the landings, the U.S. switched to quick-release buckles used by British airborne forces and which are in use today. After-action reports complained that the 75 pounds of gear carried by assault troops — including ammunition, rations, heating units and even French language phrase books — proved too bulky and reduced mobility, especially for soldiers trying to wade ashore under fire.