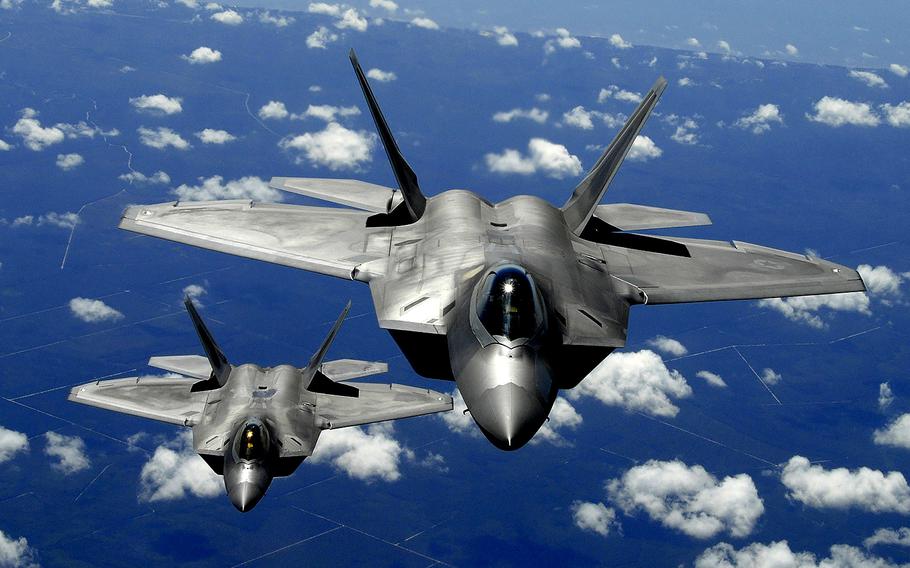 The F-22s are assigned to the 95th Fighter Squadron at Tyndall Air Force Base, Fla. A C-17 and a detachment of about 60 airmen from the 60th Airlift Wing at Travis Air Force Base, Calif., also arrived at Spangdahlem, the Air Force said.

The personnel will be assigned there through mid-September and will go through exercises to show that the service’s most-advanced fighter can deploy in Europe. The pilots will conduct combat air exercises while deployed, the Air Force said.

The fighters are expected to deploy to other European bases and NATO installations and conduct training with combat aircraft such as U.S. F-15 Eagles and F-16 Fighting Falcons.

“This inaugural Raptor training deployment is the perfect opportunity for these advanced aircraft to train alongside other U.S. Air Force aircraft, joint partners, and NATO allies,” General Frank Gorenc, U.S. Air Forces in Europe and Air Forces Africa commander, was quoted as saying in a news release.

Although the Pentagon has emphasized that the Raptors are in Europe for training, the move was a clear signal to Russia, which continues to back pro-Russian rebels in eastern Ukraine.

Air Force Chief of Staff Gen. Mark Welsh announced the move earlier this week in a Pentagon press conference, and on Friday, when the Raptors had landed, the Air Force released a less-than-discreet photo of a pair of them, with the block-lettered statement, “The F-22 Raptors ... Have Arrived in Europe”

The Raptors represent the third set of combat aircraft to deploy to Europe from the States to counter the Russia threat. In February, the Air Force sent 12 A-10 Thunderbolt II to Spangdahlem from Davis-Monthan Air Force Base, Ariz., for a six-month deployment that has so far seen the “Warthogs” travel all over eastern Europe, training with partner and allied countries. In March, 12 F-15C jets from the Florida Air Guard arrived on the Continent to bolster security in the region.

Stars and Stripes reporter Jennifer Svan contributed to this article.