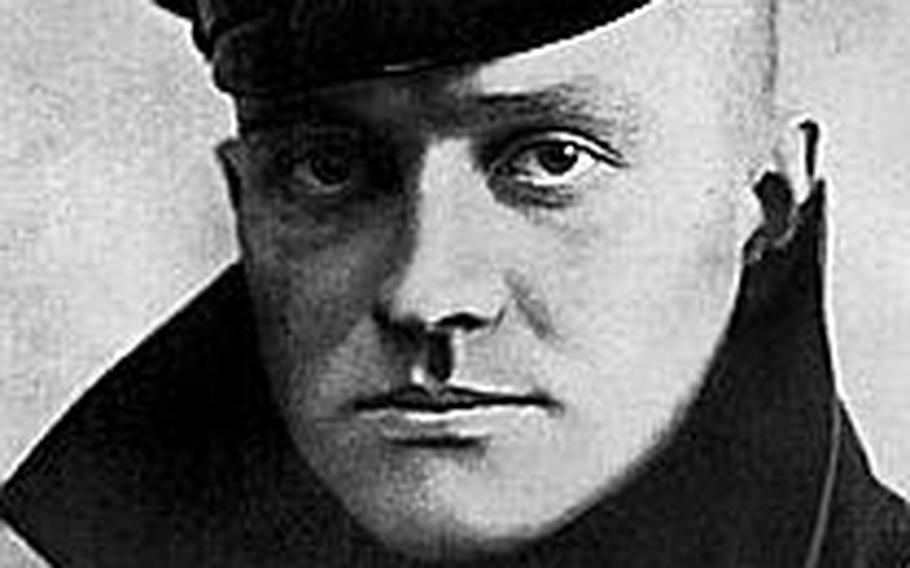 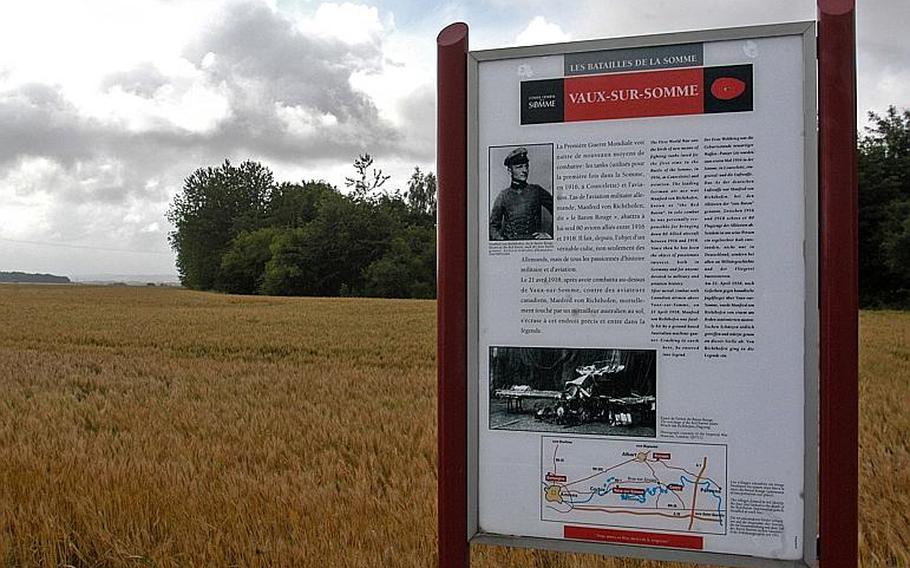 A marker at the spot where the Red Baron, in his triplane, hit the ground and died on April 21, 1918. The location is on the D1 local road between Corbie and Bray-sur-Somme, east of Amiens in northern France. (Courtesy of Peter Jaeger) 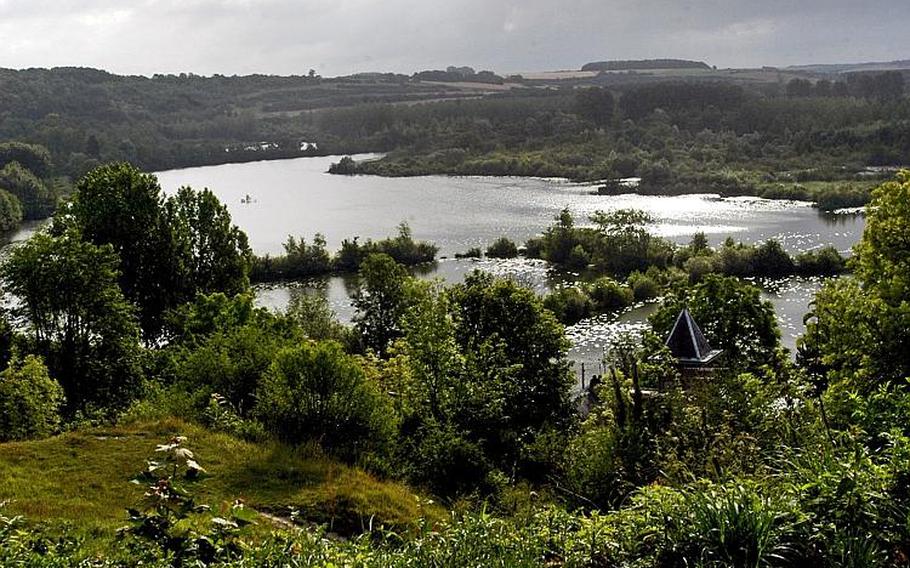 This now quiet scenery of the Somme Valley was the site of the fierce Battle of the Somme in 1918. The Red Baron's last aerial combat took place over this land. Looking east, the German lines were at the horizon. (Courtesy of Peter Jaeger) 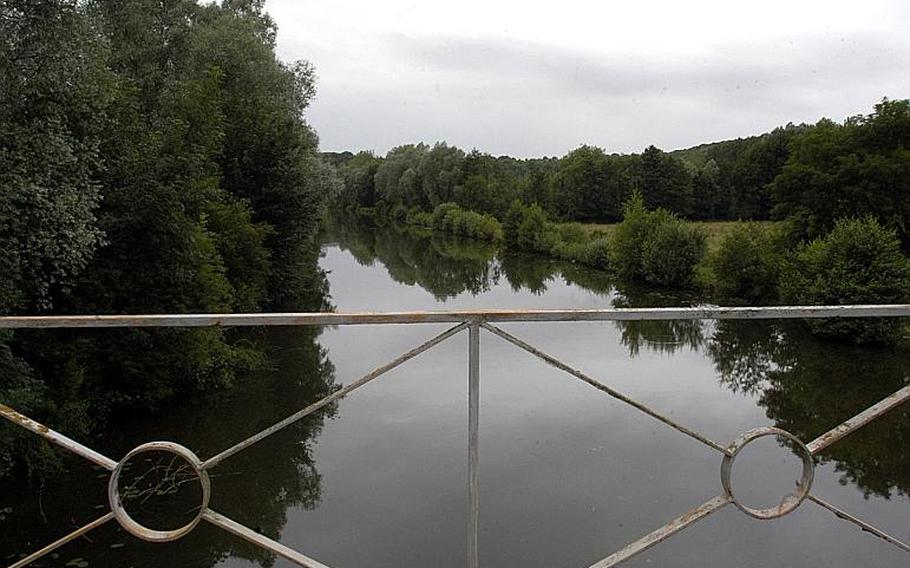 Today the Somme River in northern France is a peaceful paradise for fishermen and watersports. In 1918 it was the location for some of the bloodiest battles of the war between Allied and German forces. Not a single tree was left standing during the battles. (Courtesy of Peter Jaeger) 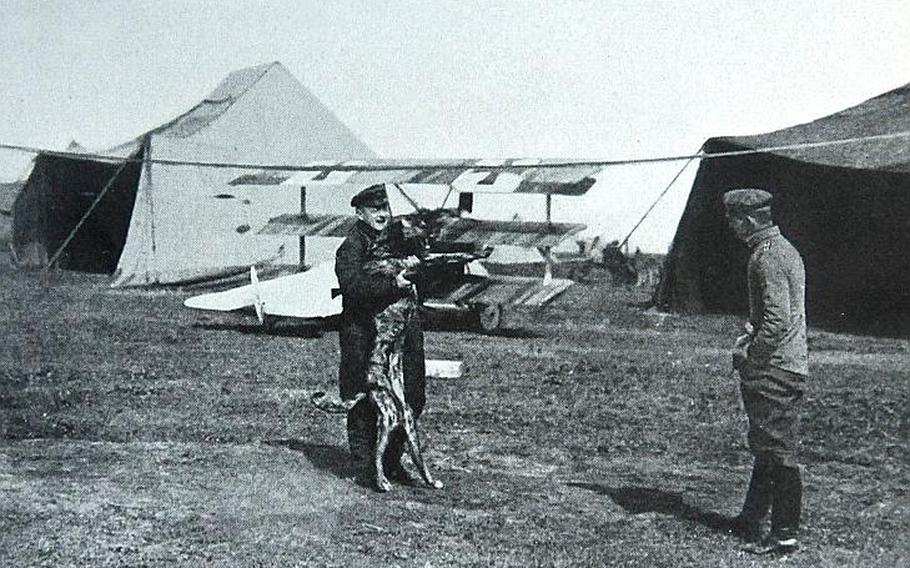 This photo of Manfred von Richthofen, better known as the Red Baron, was found in a biography of him from 1941, purchased at a flea market. The caption reads: "Richthofen, minutes before his last flight." (Courtesy of Peter Jaeger) 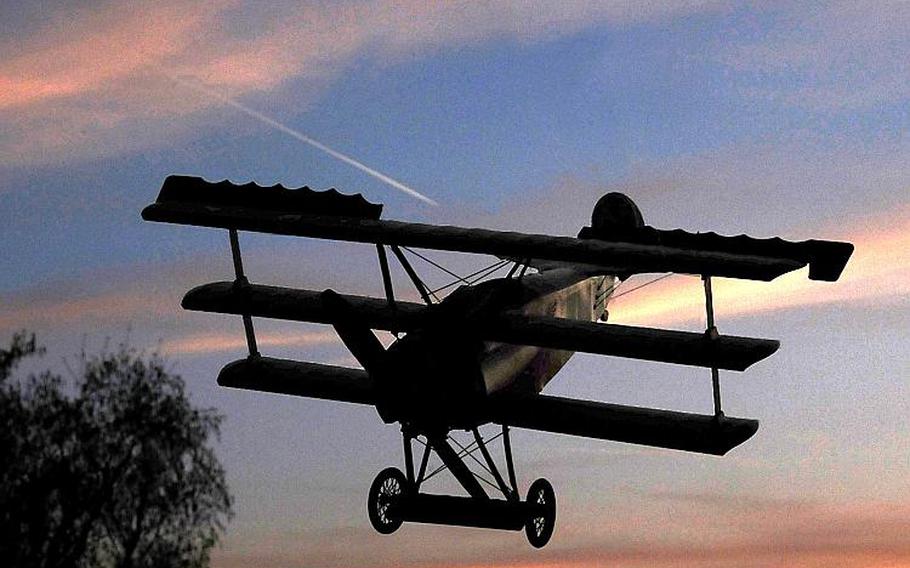 This is a model of Manfred von Richthofen's famous Dr.I triplane, photgraphed in front of the evening sky over Wiesbaden, commemorating the 100th anniversary of the death of the Red Baron in 1918 in France. (Courtesy of Peter Jaeger)

Saturday marks the anniversary of the death of the World War I flying ace known as the “Red Baron,” a man who earned fame in Germany and respect even among his enemies.

Heading for the British lines, the Red Baron, or le Diable Rouge (Red Devil) as Richthofen was known to the French after his red plane, led his Jagdstaffel 11 squadron against the British Royal Flying Corps.

The Red Baron was the most successful of all pilots during WWI, with 80 confirmed victories.

Growing fame At age 25, he was already a living legend in Germany and a respected, hated opponent among allied pilots. He had earned the “Pour le Mérite,” better known as the “Blue Max,” Germany’s highest medal for bravery in the field, and was received personally by Kaiser Wilhelm II.

His autobiography “The Red Battle Flyer” became a best-seller in Germany and his portrait postcard with signature a must-have for souvenir hunters.

Richthofen was invited by veteran clubs, schools and universities to give speeches and sign autographs to bolster the disappearing morale and enthusiasm for the war in Germany.

Military officials tried unsuccessfully to remove Richthofen from flying duties to focus instead on his public relations work. But Richthofen defiantly objected and returned to his unit.

A sobering injury In July 1917, he suffered a critical head wound in aerial combat with British forces that almost killed him. He was hospitalized for several months. Severe headaches and a darkened mood were his steady companions when he rejoined his squadron.

His fighting spirit had suffered and he wrote in his war diary: “When I read my own book, I see myself grinning back rude and brash. Now I don’t feel brash at all. After each air battle I feel miserable and when I touch the ground, I hide in my own four walls and I don’t want to talk or hear anything.

“The people back home think of the war as being battle cries and hurrahs, but it is not like this at all! Much more grim and serious.”

A final dogfight When Richthofen and his squadron reached the Somme River at Vaux-sur-Somme on the morning of April 21, a unit of British fighters awaited them. Fierce dogfights broke out immediately. The Red Baron attacked the plane of a Canadian pilot, chasing him over the river and over British lines.

He was unaware that another plane, flown by Canadian Capt. Arthur "Roy" Brown, was closing in, helping his comrade and sending bursts of machine gun fire at the red plane.

Richthofen continued to fire at the plane in front of him. Also shooting at the red plane from the ground were anti-aircraft gunners of the Australian Imperial Force.

One bullet hit the Red Baron and went through his chest and heart, sending the triplane plunging into the ground behind allied lines.

While Brown was credited with the defeat of the famous German pilot, many aviation experts believe it was ground fire that downed Richthofen. The controversy continues, even 100 years after his death.

Out of respect for their opponent, the British Flying Corps gave the Red Baron a funeral at a French cemetery with full military honors. From there, Richthofen’s remains were moved to a German military cemetery in France and later to Berlin. For propaganda purposes, a state ceremony was held for Richthofen’s body at the Invalidenfriedhof in Berlin during the Nazi reign.

When the Berlin Wall divided the cemetery, Richthofen’s mother, who lived in Wiesbaden, moved his body to the family grave at the local cemetery in Südfriedhof. Wiesbaden is now home to U.S. Army Europe headquarters.

When Richthofen’s mother got the news of her son’s death, she wrote in her diary: “Manfred is dead, my boy is dead.”

Richthofen was 25 years old when he fell.